The RAS2020 concept is a holistic production concept, which integrates the fishtanks, watertreatment installations with production logistics and ease of operation, and that all at a much smaller footprint compared to any other know systems which have proven workable in practise.

The concept is overcoming most of previous known issues in landbased farming of fish.

The cost and risks in piping has been minimised.

The entire operation can easily be overseen. And fish can be ahrv ested at a daily rate, without recuing the feeing to the fish which are yet not going to be harvested.

The concept has been optiomised to a single standard, which has proved to generate the best value for money, and the most optimal proportions for fish handling, flowstructure in tanks etc.

The standard unit called RAS2020-1200, will have the capacity to produce between 1000 ton and 1900 ton of fish per year, depending on specie and fish size at harvest. 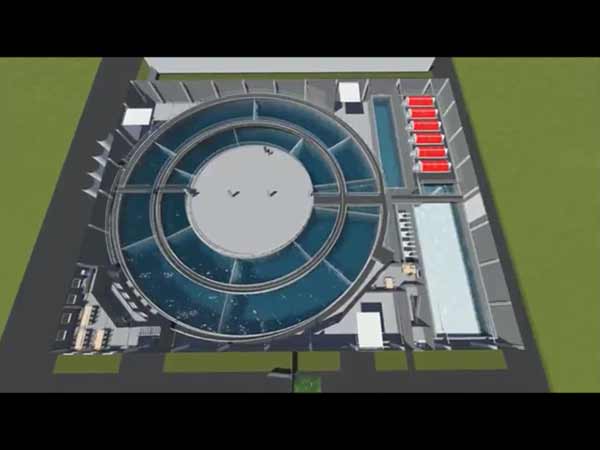 The inner central tank holds the biofilter, where as the two circular tanks, both are divided in a number of section by permeable grids, to seperate different groups of fish.

The tank sections are separated with special developed grids, which will allow for the planed flow rate

Flow setters are positioned within each of the two circular tanks, between the first and the last separate sections of the tanks. Thes adjustable flowsetters allows for the adjustment of the circular, horizontal laminar flow speed, to the desired speed, the speed which will be most optimal for the fish. Vertical flowstructures whioch are suboptimal for fish are eliminated in this concept, opposite to D-ended tanks and standard circular tanks. Flow patern and speed ahs proven to have serious impact on the strees level experienced by the fish.

In each section of the circular tanks, there will be a total water exchange in less than 30 seconds, which will secure a uniform water quality and unioform growth conditions for all the fish in the section.

The fish which will enter the facility as juveniles of typically 50 -100 gram each, will normally initially enter one of the tank sections in the inner one of the two circular tanks. As the fish grow they will be graded by use of a fish grader positioned jointly with a fish pump, on the central platform.

At some time, when the fish have achieved a specific preferred size, then they will be transferred to the first section within the outer circular tank.

The purge tank is again, seperated in several sections, so that when a group of fish is transferred to the purge tank, this group of fish will stay separately within the purge tank for a number of days, up to harvest. This facilitates the option that all fish harvested throughout the year, if disired can be purged exactly for the same time, even when daily deliveries of fish from the farm are taken place.

RAS2020 is further a protected trademark.

The RAS2020 technology is generally sold and installed by Veolia/Kruger.

Veolia is by far the biggest supplier in the world within wastewater handling.

The solid reputation of Veolia, combined with the performance warrenty, which comes with the delivery, makes it an easier task to secure the financing of the new aquaculture project.